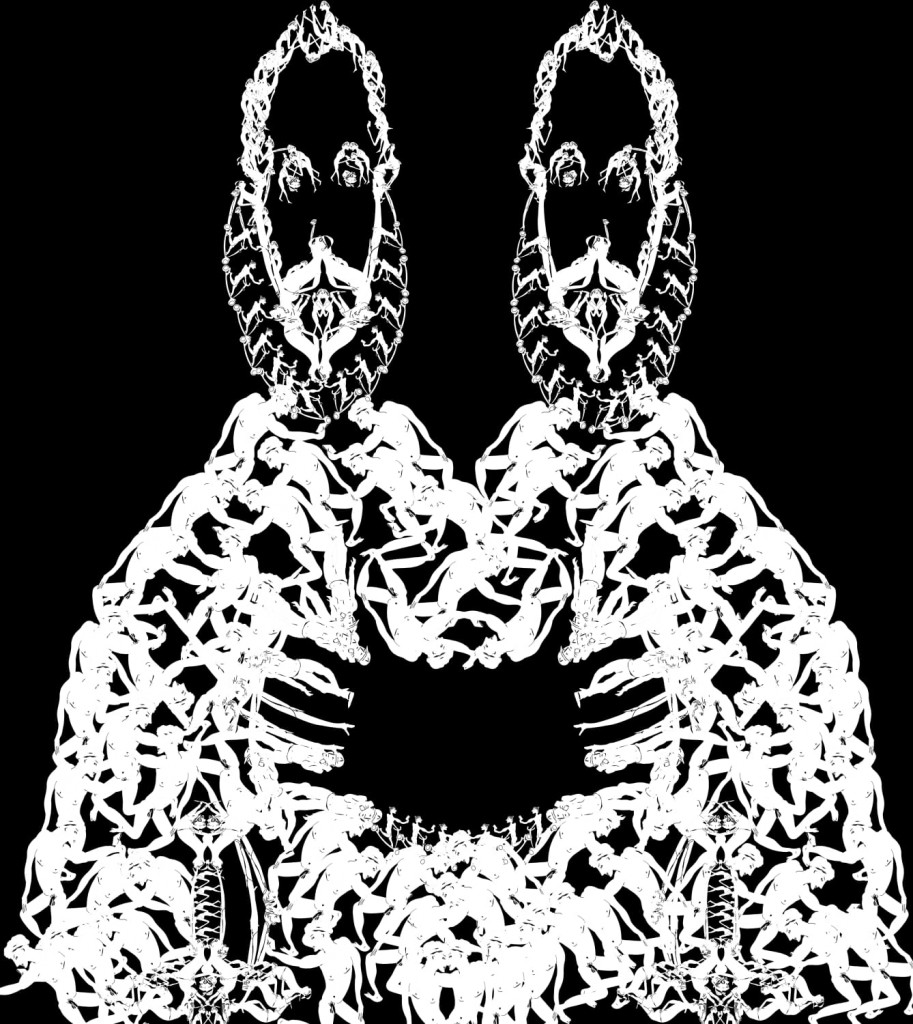 The exhibition “Selfis of the past” by Daniel Garbade, closes the inaugural exhibition cycle “Presence and essence” of the San Felipe Neri Oratory, from September 17 to December 31, 2022.

The oratory of San Felipe Neri is an exceptional setting to move us; an architectural blank canvas, now desecrated, where Garbade reflects on time and its capture, on art as an imperishable presence and essence of its time.

El Greco’s “La Trinidad” created for the Santo Domingo de Silos monastery in Toledo and currently in the Prado Museum, with influences from Michelangelo, Tintoreto and Dürer, and which served as inspiration for Picasso’s “El Guernica”; is now also a source of inspiration for Garbade in the show.

Garbade fragments “La Trinidad” into 15 moving canvases. They are collages of drawings that update the original work, like his famous Toledo sky now recreated by hundreds of moving planes. The living pieces of the collage come off, fall to the ground, escape from the canvas and participate in their time. Thus, the original work is fragmented to take on a new meaning, like the fragmented life of the viewer narrated to reconstruct it, to capture its essence.

The exhibition is completed with photographic collages of old objects, such as mantillas or sabers, with which the artist challenges us to question that it is not the object but its gaze that makes it current or past.

Garbade gives us the opportunity to explore the viewer’s current relationship with the work of art, demanding greater protagonism, being part of the work, capturing it by including oneself in it. Selfies are therefore now the tool for contemplating art, the new way of approaching it. Selfies are the new souvenir of the artistic experience, and tuning it with filters transforms us into an artist. Selfies as a collage of life, of emotions, of kidnapped and diluted time, where we appropriate everything we desire, and also art.

Thus, during the show, Garbade invites the viewer to take a selfie in front of his work and send it to him, to create together a new work in real time, in constant creation and change, which will be projected in the oratory; being the viewer now, also creator and protagonist of the exhibited work

Because art reinterprets itself over and over again, with different perspectives typical of its time, around essential themes to which no creator is alien: time and the essence of our presence in it.

The oratory is ESSENCE AND Garbade PRESENCE, and together they transport us and transcend from the sacred to the profane, hand in hand with art as necessary spiritual food that transcends its time.

VIDEOS OF THE EXHIBITION