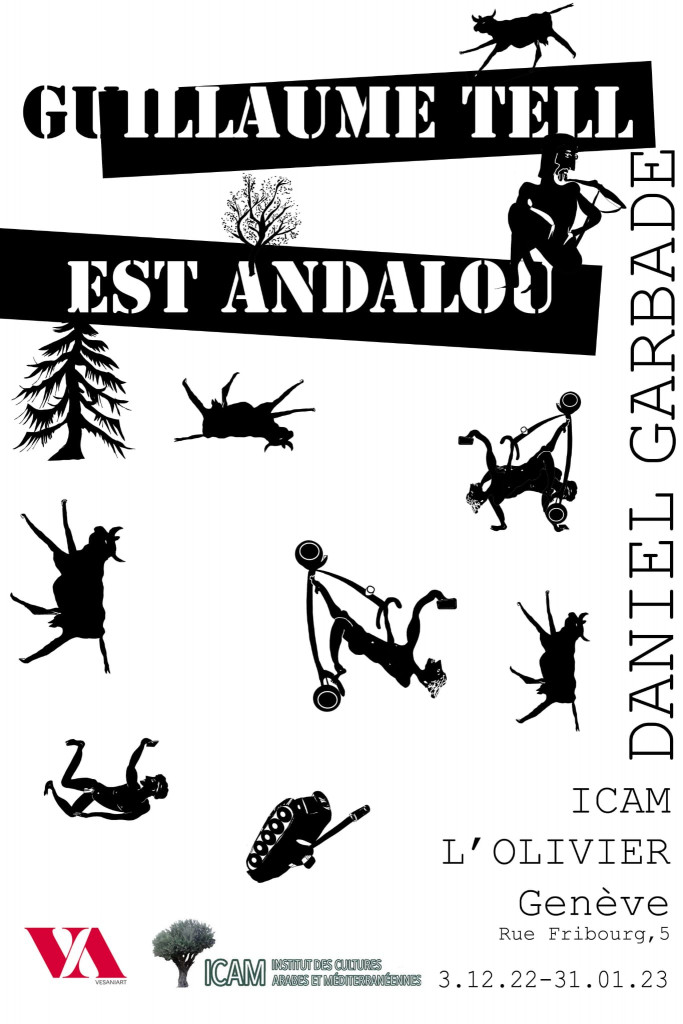 The origin of the word mosaic is found in the Greek word μoυσειoν-oυ (mouseion-ou), temple of the muses. The Romans considered that the art of creating mosaics was so exquisite that only the muses or those favored by them could do it.
In Al-Andalus, first the Almoravids, then the Almohads, then the Nasrids and in parallel the Mudejars interpreted this Roman heritage, adapting it to their style, with mosaics being a fundamental part of their architectural art.

In this context of intercultural mosaic and undoubtedly inspired by the muses, Daniel Garbade’s exhibition project “William Tell is Andalusian” was born for the ICAM in Geneva, in collaboration with the Spanish gallery Vesaniart.

Garbade, born in Switzerland and resident in Spain for more than 30 years, fuses in this project mythology, history and iconography of both countries, adding to the work of ICAM to bring cultures together through art and culture.

Garbade makes in this exhibition a clear wink to his Swiss origin; using as a reference the traditional Scherenschnitte cut-out silhouettes. With this look he continues the line two years ago, based on Spanish folkloric iconography to describe contexts of current life. In this exhibition, the artist combines both Swiss and Spanish folk iconography to describe the mosaic of his life, which is the fruit of these two cultures, achieving a striking image, subtle and complex at the same time.

In Garbade’s work there are undoubtedly muses, as is evidenced by his brilliant artistic career. Garbade’s muses are none other than the human beings that surround him, with whom he crosses paths and interacts with on a daily basis, each with their own history, and who make up the mosaic of our society and of his life and work.

His technique always starts with fine line drawings, clean and direct; to through its multiplication and evolution, create a mosaic of complex and rich prints, which allow multiple views from different approaches. With his peculiar and unique way of focusing, blurring and assembling traces of life and history, Garbade’s work blurs time and space, his life and our history.

For Garbade, memories are as precise as legends, and William Tell and himself, as Swiss as Spanish, or Andalusian or al-Andalusian.

Garbade has participated in Vesaniart’s two previous exhibitions inspired by the Andalusian legacy in Spain: “Descends au Sud: Al-Andalus” at ICAM 2020 and “Baja al Sur” at the Fundación Tres Culturas del Mediterráneo in Seville in 2021; all curated by Nuria Delgado, like the one presented here.