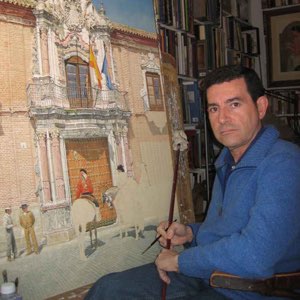 For several terms I attended an  Art Academy where I learned the fundamentals of sketching and oil painting, but most of all, the theory of colour and composition. I then became interested in the possibilities of Watercolour, mainly because of the endless tonal variations possible, and it suited my draughtsmanship abilities very well. I am totally self-taught, studying closely the technique of the British masters of the 19th century, primarily the Victorian period between 1850 and 1900. I have focused as well on Vienesse watercolours of the same period, and Orientalists in general.

I have had over 25 individual exhibitions since  1988  in Art Galleries in Madrid, Barcelona, Marbella, Almería, Granada, Seville and Málaga.

I have participated in numerous Competitions and groups, amongst others the Top 100 of the Arts for the Parks Contest of the United States National Academy for the Arts,  years 2003 and 2004.

Amongst works done for the Spanish foreign Legion, a painting presented to H.M. The King of Spain D. Juan Carlos I in June, 1994.

Also has works in the Jordanian Royal Household, and in private collections throughout the world.

Founder Member and Vice-president of the Malaga Watercolour Association.